This case will be discussed in a virtual ground round with active participation of Texas Academy of Dermatology Members. If you are a physician, and specialist in Dermatology or a related field and interested in becoming a member, please email to education@txid.org or using your telegram, send a message to @txid2 to send you the membership application form. In order to join TAD, you must download telegram program (www.telegram.org) in your smart phone.

A Middle-aged Woman with Rash and Fever

Ground Round CCNE-11-2018 A middle aged woman with fever and rash A middle-aged woman was admitted to the Hospital (H1) because of fever and a generalized rash.

The patient had a history of atopic dermatitis and had been well until 1 week prior to admission, when a painful, itchy rash developed on her chin, chest and neck; it gradually spread to her entire body, but spared the palms, soles, genitalia.

Six days prior to admission, she went to the Hospital 1 (H1) complaining of the rash that was similar to her previous eczema rash yet more severe, not painful.

At H1, Prednisone and hydroxyzine prescribed, and she was discharged home.

Two days after, the rash persisted, chills developed, and her temperature rose to 39.7°C; she went to Hospital 2 (H2)

On examination, her temperature was 38.6°C, and BP, PR, and oxygen saturation were within normal limit. A diffuse, erythematous rash with vesicles, pustules, and excoriations covering the forehead, nose, lips, chin, periorbital areas, chest, back, arms, and legs was noticeable, but spared the palms, soles, and part of the cheeks. The complete blood count was within normal limit.

The patient was admitted, clindamycin, hydromorphone, hydroxyzine, and IV fluids were started; petrolatum ointment applied to dry and cracked areas. 1 day later, a dermatologist saw her and a skin biopsy & culture were performed. A chest radiograph revealed no pathologies.

During the second night, her temperature rose to 39.8°C, and her skin started to slough with pressure. Skin biopsy:

Gram’s staining showed no neutrophils or any organisms;

Blood cultures were sterile. Other laboratory-test and culture results were pending. The patient was transferred to Texas Hospital (H3). Medications on transfer included vancomycin, acyclovir, hydromorphone, hydroxyzine, acetaminophen, and fluoxetine, albuterol as needed.

The patient complained of lesions first, they appeared vesicular, then erosions, and ultimately they became small, round, open, and painful areas, with larger eroded areas on the chest and limbs; very different from her prior flares of atopic dermatitis. Skin eruptions associated with eye irritation, tearing, and visual blurring.

Asthma and atopic dermatitis began in childhood. A rash had occurred 3 years earlier, after taking trimethoprim–sulfamethoxazole for a urinary tract infection; the rash resolved after the administration of oral glucocorticoids and hydroxyzine. Skin-biopsy specimen obtained at that time showed atopic dermatitis.

Recurrences of her eczema since then were associated with stress, menses, and some allergens, including cat, all responded to glucocorticoids and hydroxyzine. No any history of cold sores. Positive history of depression and anxiety; several years earlier had cervical intraepithelial neoplasia.

Her medications before admission included fluoxetine, lorazepam, albuterol (as needed), and triamcinolone ointment. She was allergic to penicillin (reaction unknown) and trimethoprim–sulfamethoxazole and had seasonal and environmental allergies. She had a positive test for tuberculosis 20 years earlier, and she was treated isoniazid for 9 months.

HIV test was negative in the past. She had moved to Texas 2 weeks earlier and lived with her boyfriend, who owned a cat and who had a history of cold sores but had had none recently.

Her mom died of ovarian cancer; several paternal relatives had atopic dermatitis. She did smoke five cigarettes a day and did not drink alcohol or use illicit drugs.

On examination, she was extremely uncomfortable and restless. BP was 147/63 mm Hg, the pulse 110 beats per minute, the temperature 39.5°C, the respiratory rate 24 breaths per minute, and the oxygen saturation 98.9% while she was breathing ambient air.

Pain in her skin was severe and increased with any small movements or pressure. There was mild expiratory wheezing in the right side of lung, and decreased basilar breath sounds bilaterally.

A diffuse rash involved almost all areas of her body, including the scalp, face, neck, chest & back; extremities; palms, soles, and genitalia were not affected.

There were scaly, erythematous plaques with small, and round, “punched out,” and crusted erosions (approximately 1-2 mm in diameter); isolated larger erosions with scalloped margins, associated with larger confluent areas on the chest, extremities; lesions were less prominent on the posterior trunk & knees, and buttocks. Blood levels of glucose, bilirubin, magnesium, amylase, alkaline phosphatase, alanine aminotransferase, globulin, and platelets were normal, as were the erythrocyte sedimentation rate and results of renal-function tests; other test results are shown in Table 1. Urinalysis showed yellow turbid fluid, 2+ ketones, 2+ albumin, 3-5 RBC, 5-10 WBC, and a few squamous cells per high-power field. A chest radiograph was normal. The patient was admitted to the burn service; derm & ophthalmology were consulted. Morphine was administered IV; vancomycin and acyclovir were continued. Wounds were covered with non adherent, silicone fine-mesh dressings and an antimicrobial barrier dressing. During the first 3 days, the temperature rose to 39.7°C intermittently, with tachycardia (up to 130 beats per minute). Ophthalmologic examination revealed corneal epithelial staining (in areas measuring approximately 0.5 mm), no dendritic pattern in both eyes; ophthalmic lubricant ointment & moxifloxacin ophthalmic were prescribed. The patient was able to consume liquids and small amounts of solid foods with no adverse effects, she was in a stable condition, and had adequate urine output. Lesions on the upper chest and face became coalescent, forming large erosions with scalloped borders. Cultures of blood and urine were negative, nasal specimens were negative for methicillin-resistant S. aureus; a rectal specimen was also negative for vancomycin-resistant enterococcus, and a sputum culture showed a mixed normal flora. Dalteparin started for the patient. 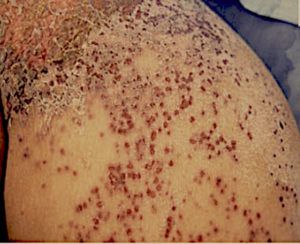 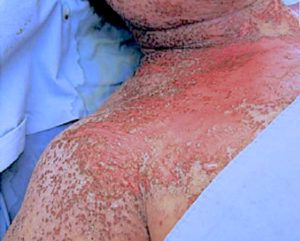 Copyright 2009-2018. Texas Institute of Dermatology, Laser and Cosmetic Surgery 24165 E IH 10, Suite 102, San Antonio, TX 78257.TM
All rights reserved, no parts of this website can be copied or reproduced without prior written approval.